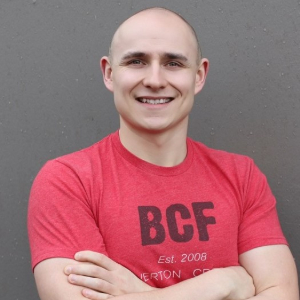 Jesse found his love for CrossFit in high school where one of his football coaches had them doing named workouts such as “Helen” and “Fran” to stay in shape. Once Jesse got to college, he did everything he could to participate, even if that meant running up and down stairs at a local gym to complete a workout. A year later in 2014, Jesse joined a CrossFit gym in Corvallis with Coach Hayley and has never stopped since.

When Jesse was 14, he broke his tibia and fibula and tore nearly every muscle in his right knee after a bad hit during a football game. After being told he may never walk again, Jesse has gone on to be a very successful athlete having participated on a Regional Team in 2017 and has CrossFit to thank for his health. Although Jesse doesn’t compete in many competitions anymore after having a baby girl in June 2018, he still enjoys the competitive spirit CrossFit brings out in him and strives to beat Coach Hayley in any WOD he can.

Jesse’s favorite part about coaching is pushing athletes out of their comfort zone and sharing in their excitement when they hit a PR!

“It doesn’t have to be fun to be fun”