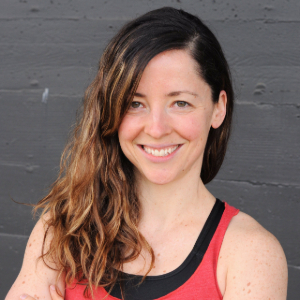 After some intense peer pressure in 2011, Sasha gave in and tried a CrossFit workout for the first time. After one workout outside of her own fitness routine, she was both inspired and humbled by the athletes around her. Over the next year, CrossFit started to become more and more a part of her life. She developed friendships with the people working alongside her, gained physical and mental strength and accomplished goals beyond her expectations.
Sasha’s journey as a coach started by becoming a yoga instructor and then soon after in 2012, becoming certified to teach CrossFit. Since then she has attended several olympic lifting seminars, competed in local CrossFit competitions, and participated in local relay runs every year.
Outside of coaching at BCF, Sasha also works for a sports rehab clinic assisting doctors in treatment, rehabilitation, and prevention of injuries. This experience has added to her knowledge base about exercise physiology and has influenced her coaching methods. She is passionate about building a foundation of healthy movement patterns and helping others discover their potential.

“The greatest obstacle to knowledge is not ignorance; it is the illusion of knowledge.” – Daniel Boorstin